And then there was None

The second bush came out yesterday but not without first breaking a 12,000 lb wench on a Super Duty Ford F-350 pickup. Jared solicited the help of a church member that had a 12,000 lb wench that could without a doubt (or so we thought) pull this second bush out. It turned out not being so easy. In fact after trying for a while with the wench and discovering that we had stripped a gear on the wench from unsuccessfully pulling the bush, Jared began to chop the roots (which had worked their way under the foundation of our house) with an axe and finally was able to pull it out with the super duty truck without the wench. It wasn't easy but now we can move on with completing the flower bed. I'll post pictures when we're done. 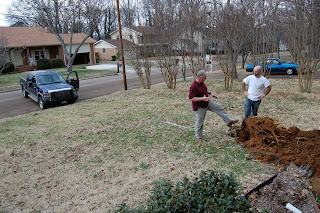 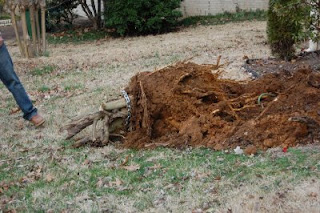