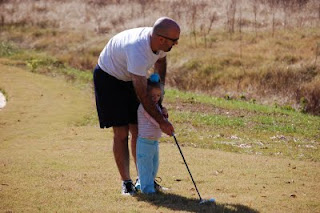 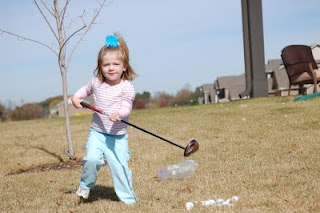 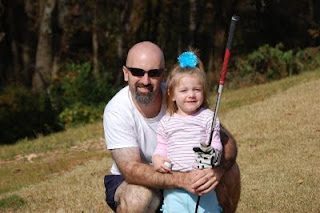 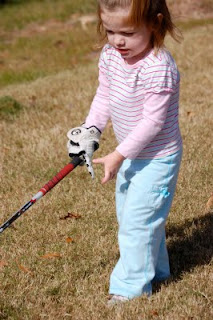 This morning was beautiful and Jared had the day off so we all headed outside. Jared thought it would be fun to hit some golf balls and Kati Ann thought that sounded fun too. So, the two of them got out in the back yard and had their own mini-golf lesson. Kati Ann discovered that Jared liked to wear a glove when hitting the ball so she too needed a glove to help her swing! What sweet memories! 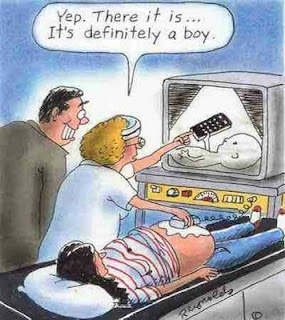 Today, we went in for our 16-week appointment. Our doctor told us that she would look at 16 weeks to see if she could tell what we were having and sure enough...its a BOY! There was no mistaking this identification. We have some very conclusive pictures. Jared & I both hardly know what to think. We've come to identify ourselves as girl parents but that's soon to change. We'll be learning a whole new world as we become a little boy's parents too.
With Kati Ann, we had a name by the time we found out what we were having but we don't yet have a name for our little guy. We'll have to start narrowing it down and hopefully will have a name to start calling our little guy soon.

On a side note: I've had requests for Belly Pics. As it would work out, I've lost SO much weight from being sick (which I continue to be) that I am actually wearing clothes loosely that were tight before getting pregnant. I'm not showing at all so my belly pics would be to show you a belly that was flatter than before I got pregnant. I actually am starting to have some pretty "cut" abs from my "exercises" over the toilet. So, at some point others may know that I'm pregnant from looking at me but as of now...I don't have much to show.
Posted by Unknown at 4:14 PM 6 comments: