A lesson from Doc McStuffins 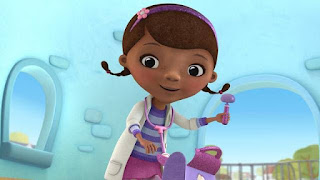 So, I did something strange yesterday.  Something that as a mom seemed a bit unnatural.  I returned a gift that I had bought for Kati Ann for Christmas.  I returned Doc McStuffins.  Doc McStuffins is the only the thing Kati Ann had asked Santa for and as her mom I really want to give her everything that she wants.  However, as I began considering all that Kati Ann was getting for Christmas not just from us but what I knew about from grandparents, I realized that she was getting EVERYTHING that she had asked for.  That sounds like a great thing but I quickly realized that as her parent, at this point in her life I'm responsible for shaping her character.  I realized that her getting absolutely EVERYTHING she asked for was not what I considered the best thing for shaping her into a godly young woman.  I don't want her to feel entitled to getting every single toy or gift that she wants.  I want her to appreciate what she has and be excited about the gifts she is getting and I feel that sometimes too much "stuff" can get in the way of shaping that attitude.  So, I wrapped Doc up and shipped her back to Amazon.  As I did, God spoke directly to me.  Isn't that what God does for me?  He is concerned about shaping my character.  Because He's my Heavenly Father, He wants to bestow on me every little wish my heart desires but because He loves me so much He doesn't. He withholds things from me that He knows will distract me or cause me to depend less on Him.  Had KA known that I had returned Doc yesterday, there probably would have been some disappointment or some push-back and don't I do that with God?  Yet, I feel like God gave me a gift from Doc.  He gave me a reminder of His love.  He reminded me that He knows better than I do about what I need.  He knows that though I enjoy a comfortable lifestyle and nice things that those aren't always the things that are best for shaping me into a godly woman.
You never know when God will use something as cute as Doc McStuffins to teach us more about Himself.
Posted by Unknown at 4:15 PM

Well done and well said! KA is so blessed.

Nice sharing. i like your blog. I am going to stumble it.Thanks.
Estetik

Completely true. I'm proud of you. Many parents don't do the hard things because they know life will do it to their kids...but then it's too late to teach your kids how to respond in the way that honors God for who he is and what he is doing in your life.

Thanks for sharing such useful information. The information provided is very very niche and this information is not available so easily. Therefore I thank the writer for the useful input.
Yüz Germe

Thanks for sharing this great news with us. I hope we will get great knowledge by this.
Kızlık zarı
Genital estetik