So, my baby came back from TX last week with a little bit of a runny nose. My mom thought she might have a cold but it was clear so I decided it was just associated with teething. I gave her some medicine and it cleared up no prob.

She continued to be fussy though and restless every night. We weren't getting much sleep at all. Still, I thought this was part of the teething process and well...this too shall pass. We woke up Sunday morning and there was more snot and it was thick (you can tell I'm a mom...who talks like this?). I worried they wouldn't take her in the nursery at church with a runny nose but they said that as long as it was clear we were okay and it was probably just associated with teething. She threw a massive fit in the nursery and they paged me to come try to calm her down but to no avail. My child was in pain...those darn teeth.

But today I may have discovered the true culprit...an ear infection. I took her to the sitter still singing the "teething song." I get a phone call around 2 while shopping at Wal-Mart saying that KA has been miserable all day and that she's afraid that she has an ear infection. So, I leave my cart at Wal-Mart and hop in the car calling the pediatrician as I drive. Busy signal. So, I keep trying and eventually call Jared who trys while I'm picking up KA. We can't get anyone at the dr.'s office. How frustrating! So what do I do? I pick KA up and drive straig 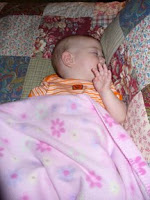 ht to the pediatrician's office because I can't get them on the phone. Of course, they won't see you w/out an appt. but at least I got a message to the advice nurse and an appt with the pediatrician at 8:30 in the morning. Sometimes it takes walking in when they won't answer the phone to actually get something done!

So, I talked to my friend that is a pediatric doctor in the NCU at Huntsville Hospital and she told me the dosage of pain medicine I could give KA to make it through the night. Right now she's laying next to me sleeping and I'm praying for some sleep tonight for all the Allens that have had a rough last week with very little sleep.
Posted by Unknown at 7:50 PM

You're so right! Who, but moms talk about snot, pee, poop, and gas?...well, maybe youth ministers!!!

I hope last night was better.