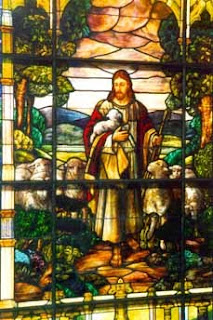 Kati Ann & I visited my grandmother's small little church on Sunday morning. Typically, Kati Ann is not in church with us but my grandmother's church is small and doesn't have childcare. So, it came to the time for the "Children's Sermon" and Kati Ann wanted to go down with the other kids but wanted me to go with her which was fine. So, she and I headed down to front and sat on the floor. She immediately started talking to the gentleman that was trying to do the Children's Sermon. She pointed to the big stained glass window behind the alter (very similar to the one in the picture above) and begin talking about it. The gentleman asked her who was in the picture. I whispered to her that it was a Jesus and she told him it was Jesus and then she went on to tell the gentleman that "Jesus was mowing." The poor, unsuspecting gentleman looked at me and I at him. He asked me if I understood what she said. Being the upstanding Christian, I played dumb and told him I had no idea! How was I to tell him that Jesus was MOWING in the beautiful stained glass picture! From the mouths of babes!
Posted by Unknown at 9:52 AM

Ugh girl! Get your prioritizes straight! Like the good book say:

Behold, children are a heritage from the LORD, the fruit of the loom a reward. Like arrows in the hand of a warrior are the children of one’s youth. Blessed is the man who fills his quiver with them! He shall not be put to shame when he speaks with his enemies in the gate.
(Psalms 127:3-5 ESV)

You need to show some gratitude to that child. If she say he mowing then so be it.